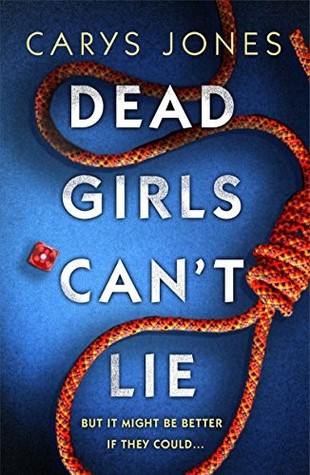 Best friends tell each other the truth – don’t they?

When North Stone’s best friend Kelly Orton is found hanging lifeless in a tree, North knows for certain it wasn’t suicide. Kelly had everything to live for – a loving boyfriend, a happy life, and most importantly of all, Kelly would never leave North all by herself.

The girls have been friends since childhood, devoted to each other, soul sisters, or at least that’s what North has always believed. But did Kelly feel the same way, or was she keeping secrets from her ‘best friend’ – deadly secrets…

When the police refuse to take North’s suspicions seriously, she sets out to investigate for herself. But her search soon takes her to a glamorous world with a seedy underbelly, and before long North is out of her depth and getting ever closer to danger. Determined to find the truth, she soon wishes that dead girls could lie, because the truth is too painful to believe…

I have to admit I was not a huge fan of Wrong Number, but I’m always willing to give an author another try.

I would have liked to have had more information on the characters, Kelly came off as someone just using North as a get out of trouble card. I didn’t see a real friendship here.

There was too much wrong with this story to make me care about any of them. I thought it was quite shallow and it did not hold my attention or make me want to know what happened.