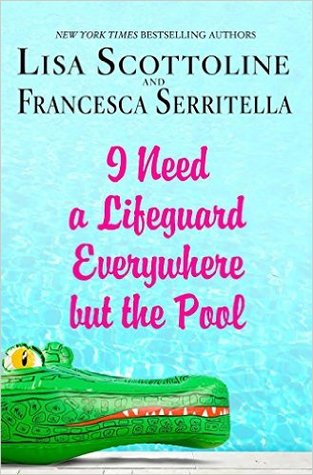 The bestselling and “perennially hilarious” mother-daughter team is back with a new collection of stories from their real lives, guaranteed to make you laugh out loud. Join Lisa and Francesca as they regret drunk-shopping online, try smell-dating, and explore the freedom of a hiatus from men – a Guyatus. They offer a fresh and funny take on the triumphs and facepalm moments of modern life, showing that when it comes to navigating the crazy world we live in, you’re always your own best lifeguard.

Mother and Daughter have once again succeeded in making us laugh until we cry as they share their lives, and views on every topic you can think of!

Two generations give us their take on life today. And it all works beautifully. Funny, Touching and Thought provoking subjects that each one shares with us in alternate chapters.

It was my pleasure to read this book which was so funny I literally snorted tea out of my nose!  I was very pleased to see her in Oklahoma City recently thanks to Literary Voices and she is a delight! The relationship between Mothers and Daughters can be complex. But also such a deep connection between two people who love each other and share their journeys with grace, elegance, and strong opinions!

So Here is an Exclusive Excerpt from the book! If you follow her on FB or Twitter say Congratulations!

Mother  Mary  and the Eyebrow

Let me tell you something about Mother Mary, my late mother who is nevertheless with us in spirit, her feistiness in our hearts and her voice in our ears.

Probably like your mother’s voice, except after two packs of More 100s a day.

The fact is, as feisty as Mother Mary was, she never yelled. That may surprise you, but it’s true.

My mother ruled our house and she never once raised her voice.

It was Teddy Roosevelt who said, speak softly and carry a big stick, and I’m betting he knew my mother.

She spoke softly and carried a wooden spoon.

Her spoon was like a scepter, only used for stirring gravy.

Instead of yelling, she had a series of Meaningful Facial Expressions that conveyed her will.

Chief among these was The Eyebrow.

when she didn’t like something I was doing, though she used it only when necessary, like a handgun.

The Eyebrow was meant to convey:

Put that down. Don’t be fresh. That’s not funny.

Mind your own business. Don’t have so much to say.

Mother Mary also had a Major Glare that she could fire at me from the stove, which made it more potent than The Eye- brow, like a long-distance missile.

Don’t talk that way to your brother. Don’t be so fresh.

Who are you kidding with that (action or comment)? Where do you get off ?

This last is impossible to translate. If you’re from South Philly, you get it immediately. If you’re not, please don’t sweat it. If you can’t figure it out, let it ride. No one is meant to know everything in the world.

To stay on point, the atomic bomb in Mother Mary’s ar- senal was The Frown.

You prayed The Frown did not come your way.

The Frown was Mother Mary’s ultimate warning sign, and The Frown meant that she was going to Point Away, and if she Pointed Away, that meant that whatever you had done was so bad, you had to leave the room. She didn’t care where you went, only that it was Out.

In fact, if Mother Mary said anything when she Pointed Away, it was, “Get out of my sight.”

My mother was not alone in believing that quiet can be more powerful than noise. The Godfather rarely spoke a whisper through three movies, except when he got to Johnny Fontane, who would try anybody’s patience.

I bet your mother had an array of meaningful expressions, scary frowns, and lifted eyebrows, and they would come in handy in this election season.

Because every candidate is yelling. Now listen, I’m no Pollyanna.

I know that people get angry and I’m generally a fan of emotion. And to be real, it makes great television. A debate where everybody is yelling at each other is totally fun to watch.

Until you realize that’s how we choose a president. In a country we love.

Nobody in the debates is listening to each other because they’re too busy yelling. And they don’t listen to the ques- tion, either. They just wait until the question is over and take it as their signal to start yelling. Then other candidates on the stage interrupt them and start yelling. Nobody listens to any- body else and nobody answers the question, and when it’s over, the surrogates say it was a great debate.

The problem with yelling is that it’s the same thing as bullying.

And it seems like every week there’s a new debate, where we can watch candidates bully each other. And then we start to talk to each other about our views, and our voices get louder, and we start bullying each other.

It’s not our fault, it’s theirs. But maybe we can stop it.

They adored each other, though their views were very different.

It’s not coincidental that neither of these people was the type to raise their voice. I have seen arguments before the Supreme Court, and although Justice Scalia’s questions were pointed, he did not yell. I also heard Justice Ginsberg ask questions from the bench, and you could barely hear her.

Don’t think this is because they’re judges, because I’ve seen and heard judges yelling in court.

So what I’m saying is that true power lies in a soft voice and a listening ear.

It’s okay to disagree with someone.

It’s not okay to yell at them, bully them, or call them names.

And it’s not okay to rejoice in anybody’s death, nor is it okay to exploit that death for political gain.

I know that because I was raised right. By The Eyebrow.

2 thoughts on “I Need a Lifeguard Everywhere But The Pool by Lisa Scottoline and Francesca Serritella ( It’s Release Day Y’all!! And We Have an Exclusive Chapter for You All!)”

Live Up The Senses