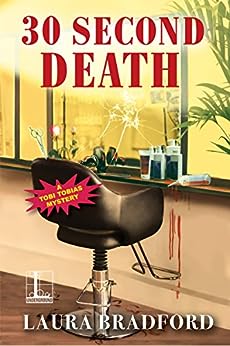 When Tobi Tobias opened her own advertising agency, Carter McDade was there for her every step of the way. A brilliant hairdresser, Carter has just landed his dream project: doing hair and makeup for a theatrical production of Rapunzel. But the dream turns into a nightmare when he runs into Fiona Renoir, a cruel, talentless starlet who won’t let Carter touch a hair on her head.

To get Fiona out of Carter’s hair, Tobi hires the difficult actress for a bit part in her latest commercial. But true to character, Fiona is a terror on set, and Tobi is starting to think she’s made the biggest mistake of her life. But things get even worse when Fiona drops dead in the hairdresser’s chair, and the only suspect is the man left holding the tainted hair dye, Carter McDade. And unless Tobi can prove his innocence, he’ll never do hair in this town again.

Tobi is a character! I love this group of friends and family that all love and support Tobi.

Tobi is determined to find out who killed the nasty Fiona. And clear her BFF at the same time. With so many suspects, Grandpa Stu comes to visit and help her out. Or did he come to hook up with Tobi’s nasty neighbor? Lots of mysteries here!

The characters are well developed and  this not your typical cosy mystery. Ms. Bradford has several mystery series out, so check out her Amazon page and see if you find something you like!

One thought on “30 Second Death by Laura Bradford”