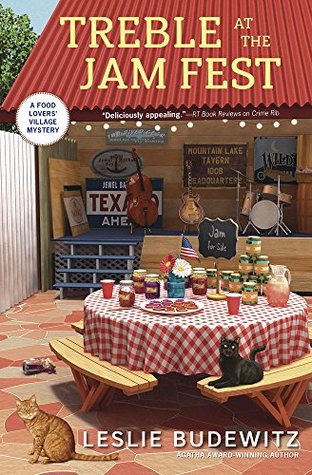 Erin Murphy, manager of Murphy’s Mercantile (aka the Merc), is tuning up for Jewel Bay’s annual Jazz Festival. Between keeping the Merc’s shelves stocked with Montana’s tastiest local fare and hosting the festival’s kick-off concert, Erin has her hands full.

Discord erupts when jazz guitarist Gerry Martin is found dead on the rocks above the Jewel River. The one-time international sensation had fallen out of sync with festival organizers, students, and performers. Was his death an accident—or did someone even the score?

Despite the warning signs to not get involved, Erin investigates. And when the killer attacks, she orchestrates her efforts into one last crescendo, hoping to avoid a deadly finale.

Jewel Bay, Montana is home to Erin Murphy and family. The Merc aka Murphy’s Mercantile has been in the family since 1910 and Erin is now in charge.

In between handling business at the store and playing kissy face with boyfriend Adam, she gets involved in trying to figure out who killed Gerry Martin. For someone who wasn’t from the area, he sure seems to have impacted quite a few lives in Jewel Bay.

There is no shortage of suspects and even though she knows she should mind her own business, she just can’t.

All of our favorite characters are back. And we learn some new things about them too!

I really wish someone would bring The Merc here! The descriptions of the store, the stock, it all just sounds like you could curl up in the corner and never leave! 4 thoughts on “Treble At The Jam Fest by Leslie Budewitz”