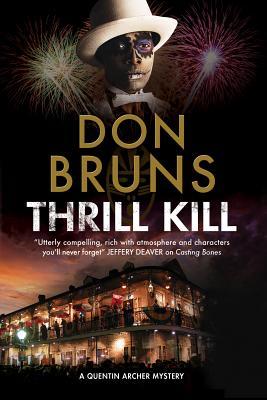 Beneath the carefree atmosphere of Mardi Gras, something very sinister is going on in the intriguing new Quentin Archer mystery.

Three murders so far. No apparent motive; no link between the victims; none of them have been robbed. One item ties them together: a can of spray gas known as Chill has been left at the scene of each crime. Is someone killing for kicks? With no leads to pursue and no witnesses coming forward, all the cops can do is wait for murder number four.

As rumours emerge, Archer realizes there’s a pattern taking shape. Could there be more to these seemingly random killings than meets the eye? Teaming up with voodoo queen Solange Cordray, Archer begins to uncover evidence of a shocking conspiracy.

This is the second book in this series starring Detective Quentin Archer (Q), now in the murder capital of the country, New Orleans. Q is a good guy. A good man who was forced out of Detroit under tragic circumstances.
When bodies start showing up and there is nothing the police can see linking them to each other except the can of Chill found at each site.

Now with three dead bodies, and no leads or motive or even witnesses, as horrible as it sounds there seems to be nothing they can do but wait until this killer strikes again.

With nothing to lose, Q contacts Solange Corday, a psychic, who hopefully can help them find something.
Set in a city I know very well, New Orleans, this author didn’t bother to romanticize the city but showed the side the tourists don’t notice in their frenzied partying. The ugly, dirty side. The one with gangs and all kinds people without good intentions prowling the streets unnoticed in the Mardi Gras crowds.

Thanks to Netgalley and Severn House for this early copy!