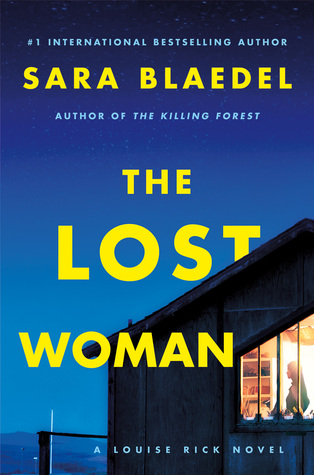 Shot with a hunting rifle through her kitchen window, the woman is dead before she hits the ground. Though murdered in England, it turns out that the woman, Sofie Parker, is a Danish citizen–one who’s been missing for almost two decades–so Louise Rick is called on to the case.

Then the police discover that the woman, Sophie, had been reported missing eighteen years ago by none other than Eik, Louise Rick’s police colleague and lover. Impulsive as ever, Eik rushes to England, and ends up in jail on suspicion of Sofie’s murder. Unsettled by the connection, and sick with worry for Eik, it falls to Louise to find the killer in what will become her most controversial case yet…

The latest thriller by Sara Blaedel shows you exactly why she is always Number One in Denmark and around the world.

A crime writer merging with a great storyteller!

Louise Rick is  one of my favorite book detectives.  And even though I can’t pronounce a single name in these books, I really enjoy the writing.

It is very hard to review this without giving anything away to spoil the fun of unraveling the mystery of who the missing woman is/was and where has she been all of these years, and what in the world does it have to do with Eik?

Louise is running all over the place in her new position with the Missing Person unit but this case has her back with her old homocide unit as well. What does the disappearance of this woman have to do with bank accounts in Switzerland?

The subject matter is a touchy one for a lot of people. End of life care. Who has the right to decide to live or die? While there are a few countries and some states that allow for assisted death, it is a very controversial topic. And I’m not even sure how I feel about it. On one hand, it is your life and you are free to end it at anytime. But it is a lot more complicated than just deciding to end your own life because you don’t want to be a burden, or be in pain. The people left behind will suffer no matter which way you go.

This is a really good book and I hope you give it a read!

5 thoughts on “The Lost Woman by Sara Blaedel”