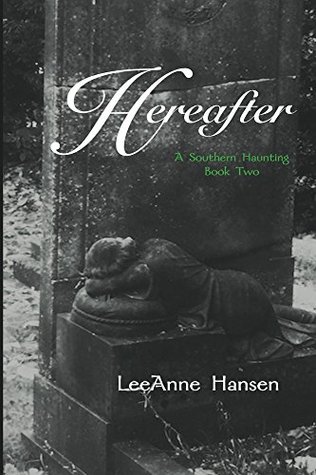 Following up Yonder, Ms. Hansen has given us the second in the Southern Hauntings Series, Hereafter.

Forced to live and run a business with a woman who shattered his heart years ago, and without his father’s help, Charles’ life is far from ideal. Renowned  as a ladies’ man, Charles now finds himself coming up short on women, charm and even dead bodies for his mortuary. He knows who is to blame for all this, even if he hasn’t the slightest idea why she is causing him so much torment …

Samantha has been given a second chance even though she knows that she does not deserve one. Now haunted by her past, she fled from a life she was desperate to escape, only to collide with the man who once held her heart but now wishes nothing but to crush it. Has she just run from a smoldering fire to an even deadlier one?

As the night grows darker and storms brew on the horizon, both Charles and Samantha realize that the past is not an easy ghost to shake and the future is rarely predictable.

When Samantha left town without so much as a goodbye to Charles, she knew she was breaking his heart but the way events unfolded that night, she wasn’t given a choice.

Now she is back and while Isabel knows what happened to her, Charles does not and now finds out she is his business partner in the mortuary whether he likes it or not.

Going only on the information he does have, he is intent on making her life hell. But she has already been in hell and is still trying to keep the nightmare away. Having to stay in the same house as Charles is bad enough but having to sleep with only a bathroom separating them is almost unbearable.

But someone wants her here. Someone she can’t see but she knows that someone or something is messing with her mind and her belongings. Spooky things start happening and when she does find out what is going on  she may not live to tell what she suspects.

I must say that I did not see that ending coming! Ms. Hansen is very adept at making the reader feel things. You can feel the unbearable heat and humidity of Mississippi in the summer. Especially at a time when air conditioning was unheard of. Your heart will be touched by the things Samantha has endured in her life. You will smell the flowers that aren’t really there and feel the music that mysteriously plays on its own.

A very good follow-up to Yonder and I am hoping we see more of the characters we have grown to care about! And Soon!

LeeAnne Hansen was born in Paris, grew up in Oklahoma and now lives in sunny southern California with her husband and cats. She enjoys writing, acting and playing bass guitar. She can be seen gracing the stage in various theaters or even directing. She is a graduate of the American Musical and Dramatic Academy in New York City and has studied art and astronomy. She also thoroughly enjoys long walks on the beach.