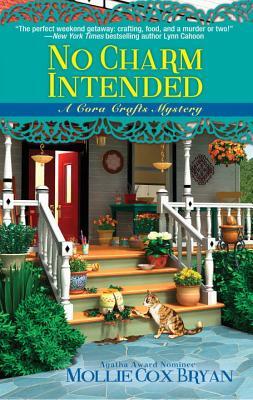 Cora and her best friend Jane are back with another weekend craft retreat. This time the theme is wild crafting and after the last retreat they could use a smooth week end filled with food, crafting, and friendship.

Settling into her new life and career in small-town Indigo Gap, North Carolina, Cora Chevalier is preparing to host a wildcrafting retreat at her Victorian home, Kildare House. But on day one, Cora wakes up to a disturbing text. I kidnapped her.  Is this some weird wrong number or is something going on.

Gracie, a seemingly lovely girl who is a student,nanny and part time sitter for London, Jane’s daughter, is missing.

When the police arrive Cora finds out she isn’t the only one who received weird texts and when Gracie’s boyfriend, Paul, and their good friend Henry show up at Kildare House scared and worried, rambling on about some game they all played on line and how they need Cora’s help to find her before something really bad happens.

Cora isn’t sure if Paul is involved, but lets him stay at Kildare House, as she and Jane and of course the crafters put their heads together and get to work on solving a crime and having a great time at the retreat.I can tell you I did not see that ending coming!

This is the second book in the Cora Crafts series and you can tell. The characters are developing very well. In the first book I wasn’t a huge fan of Jane, but this time was different. There was an easiness about them that was very believable. As if all the kinks have been worked out.

I especially enjoyed seeing a couple of the gals from the Cumberland Creek Series. I think that meshed quite well and hope to see more of the cross over. I also like that Cora isn’t a ditzy, frazzled, overweight main character as so many are in cozy mysteries. She is easy to relate to especially if you have any type of anxiety disorders. And I appreciate that.

Thank you Netgalley and Kensington for this one!

Click here to read more about Mollie’s books and her other series.   Amazon

Mollie Cox Bryan writes cozy mysteries with edge and romances with slow, sweet burn. She wrote the Agatha-award nominated Cumberland Creek Mysteries. Several of the books in that series where short-listed for the Virginia Library People’s Choice Award. The first book in her new mystery series, “Cora Crafts Mysteries.” is DEATH AMONG THE DOILIES, which was selected as “Fresh Fiction Not to Miss” title. She’s also penned a historical fiction: MEMORY OF LIGHT: AN AFTERMATH OF GETTYSBURG, the Kindle World’s bestselling romance novella, THE BEEKEEPER’S BRIDE, A ST. HELENA VINEYARD KINDLE WORLD novella, and the soon-to be released, EVERY FIBER OF YOU, A ST. HELENA VINEYARD KINDLE WORLD novella. She makes her home at the foothills of the Blue Ridge Mountains in the Shenandoah Valley, Va.