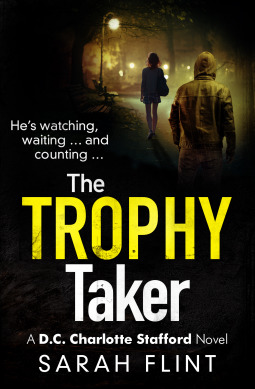 This is the second of the D.C. Charlotte Stafford mysteries, based out of London. Charlie has been trying to get scum like Cornell Miller off the street and this time it looks as though the charges may stick.When that doesn’t happen, Charlie will have to put Cornell on the back burner as she and the entire department must know look for a killer who is even worse than Cornell.
As Charlie and team delve into the bodies being left in cemeteries, all with the same general MO, hearts ripped out and tossed carelessly on the ground, items left in the cavities and one ring finger missing on each victim, Cornell goes on his own crime spree and Charlie is hoping she can still get him behind bars. But there is only so much Charlie can do.

Everyone is keeping some kind of secret, but is any of it worth murdering to keep quiet about it?
Will Charlie end up on a slab before she can figure out who is behind these killings? It will keep you guessing!

Flint’s descriptions are great, and her characters are pretty well developed.

As far as my own opinion, the book seemed to go at a pretty steady pace and then at the end things just were over. I would have liked to have seen a little more depth in the characters.

One thought on “The Trophy Taker A D.C. Stafford Novel By Sarah Flint”