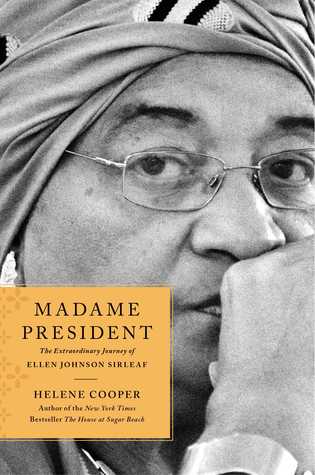 Pulitzer Prize-winning journalist and bestselling author Helene Cooper brings us the personal story of Sirleaf as well as the larger narrative of the coming of age of Liberian women.

Born in Monrovia in 1938, the daughter of Sirleaf’s father was Gola and her mother had mixed Kru and German ancestry. She attended college at the College of West Africa until 1955. She was married at 17 and quickly had four boys. When her husband came to the United States to study, she came also. She obtained an associate’s degree from Madison,Wisconsin. For years she studied in the United States at the best universities.

This is her personal story and I am going to tell you it was difficult to read. We don’t hear these things on the news. In a world where women take being beaten and raped as just the way it is, Ellen had a vision and she set about learning as much as she could about Economics and obtaining relationships with people who could and did help her on her journey.. When she had the knowledge she needed she then returned to her country to try and repair the damage done by past administrations. She was appointed Minister of Finance and she was tossed in prisons and threatened. But she never backed down and all of those relationships she had formed in the world of finance and politics had served her very well when she made her own bid to lead her country.

By then there was a huge movement of women in the area and they were not going to be silent much longer. In 2006 she was elected President of Liberia. She is the first woman elected head of state in African history. She has held positions with the World Bank and many other organizations and met with Obama and Hillary Clinton, when begging for help with the Ebola crisis.

Through crisis after crisis, including the Ebola outbreak, she has been a remarkable role model, fighting for her country and her people. She along with Tawakkul Karman, and Leymah Gbowee was presented with the Nobel Peace Prize in 2011.

As I said, this was hard to read. It is always difficult to read about human atrocities performed on the very people their government is supposed to protect. When you are dependant on that government for even your food. Nepotism was just one of the problems that kept those in power in luxury while the rest of the people suffered.  Why would no one stand up to these men? Why was the U.S. giving money to people who were only using it to pad their own pockets?

I had a lot of questions after this book. Such as why aren’t we seeing this on our World News? Who oversees all the money we send to all of these countries and how do we hold them accountable?

Thank you so much Netgalley and Simon Schuster for this early copy of an important biography.  This books set for release on March 07, 2017

Helene Cooper is a Liberian-born American journalist who is a White House correspondent for the New York Times. Previous to that, she was the diplomatic correspondent for the paper based in Washington, D.C.. She joined the Times in 2004 as assistant editorial page editor.
At The Wall Street Journal, Cooper wrote about trade, politics, race and foreign policy at the Washington and Atlanta bureaus from 1992 to 1997. From 1997 to 1999, she reported on the European Monetary Union from the London bureau. From 1999 to 2002, she was a reporter focusing on international economics; then assistant Washington bureau chief from 2002 to 2004.

Pass Me That Book
pop and culture