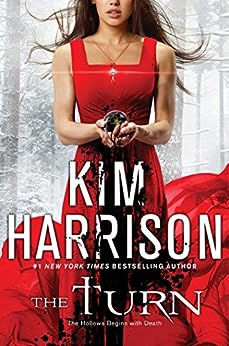 #1 New York Times bestselling author Kim Harrison returns to her beloved Hollows series with The Turn, the official prequel to the series that will introduce you to a whole new side of Rachel Morgan’s world as they’ve never seen it before!

Can science save us when all else fails?

Trisk and her hated rival, Kal, have the same goal: save their species from extinction.

But death comes in the guise of hope when a genetically modified tomato created to feed the world combines with the government’s new tactical virus, giving it an unexpected host and a mode of transport. Plague rises, giving the paranormal species the choice to stay hidden and allow humanity to die, or to show themselves in a bid to save them.

Under accusations of scientific misconduct, Trisk and Kal flee across a plague-torn United States to convince leaders of the major paranormal species to save their supposedly weaker kin, but not everyone thinks humanity should be saved, and Trisk fights the prejudices of two societies to prove that not only does humanity have something to offer, but that long-accepted beliefs against women, dark magic, and humanity itself can turn to understanding; that when people are at their worst that the best show their true strength, and that love can hold the world together as a new balance is found.

In this  prequel to The Hollows Series, we get to see  Trent’s parents and how they met and what went down between them and the rest of the world. Rachel isn’t born yet and as much of an ass as Trent is, his daddy is way worse!

I loved this book. But then I haven’t missed any of Kim’s books. Especially the Hollow series. It was great to see how the characters we now either love or hate got to be the way they are. And now I get the tomato thing!

I really don’t want to give anything away here. Especially because my fellow readers over here aren’t quite done with the book.

Yes, I loved it and yes, I would buy it again. Can we just talk about how beautiful the cover is? Thank you Ms. Harrison for this peek into the past!

6 thoughts on “The Turn By Kim Harrison”