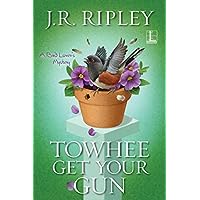 The second in the Bird Lover’s Mystery Series, finds our favorite lover of all things bird related, Amy Simms, owner of Birds and Bees trying to figure out who the dilapidated van parked in front of her store belongs to. Once she has had enough of her new neighbors squashing her plants and blocking her customers parking, she heads over to introduce herself.

Paul Brewer is unfortunately not re-opening a garden center, but is opening a biergarten. And the bad news is still to come, her ex is his business partner!

Living in an ancient Victorian style house which houses the shop, a few apartments and the top floor where Amy and her mother live, she already has a lot on her plate when she is volunteered to act in Ruby Lake, North Carolina’s theater group which this year is putting on Annie Get Your Gun. And the star is non other than Ava Turner, famous and reclusive there is a lot of mystery going on with this one!

As the theater is plagued by one accident after the other, someone is found dead in our star’s dressing room!
When Amy’s cousin is implicated, of course she is going to get involved. It’s what she does, rescue injured little towhees and snoop around poking her little beak where it doesn’t belong!

And we’re still fighting City Hall to keep the home she owns from being demolished in the name of progress.

There were so many foul characters in this one even I wasn’t sure until the very end who did what and why!

And there is a bonus read of the next book in the series so thank you to Mr. Ripley for those little breadcrumbs which will hopefully sustain us until the next adventure of Ms. Simms is in our hands!

Thank you to Netgalley and the Publisher for this!

4 thoughts on “*Release Day* Towhee Get Your Gun by J.R.Ripley”