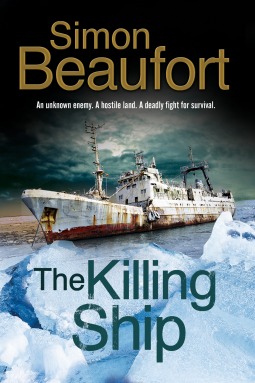 “A group of scientists in the Antarctic face a desperate battle for survival as they are hunted down by hostile intruders. ”
Having spent the summer conducting fieldwork on stark Livingston Island, marine biologist Andrew Berrister is looking forward to returning to civilization. But his final days in Antarctica take an unexpected turn when it becomes clear that he and his small group of scientists are not alone on the island. Deducing that the intruders are a crew of illegal whalers, the scientists face an increasingly desperate struggle for survival when two members of their shore party disappear and their supplies are deliberately sabotaged.
As Berrister and his remaining companions flee across the treacherous, icy terrain, they are pursued unrelentingly by ruthless killers whose true reasons for being in the Antarctic are darker and more dangerous than the scientists could ever have imagined.

I first saw this book a month or so ago in the Library Journal. I haven’t read a lot of books set in Antarctica and I was curious how this was going to go down on a bunch of icebergs and glaciers and the brutal weather conditions.

Ten days from being collected and going home and things have started to go wrong. Two of the researchers are missing, food and fuel sources have been sabotaged and the remaining group must figure out a way to communicate with their headquarters and hopefully get some help. But the ships that show up aren’t there to help.

They are there to harpoon whales and collect the highly profitable meat sales. Or are they?

One thing I know after reading this book is that I am not going on any ice adventures…ever!  It was a good read, I’m glad to have found it and some new authors!

In the real world there is always some type of research being done in the Antarctic. And after reading this book I have the greatest admiration for them! This is a chilling thriller! And the research in it shows from the first page all the way to the shocking ending!

I would have no problem recommending this book.

4 thoughts on “Book Review: The Killing Ship by Simon Beaufort”