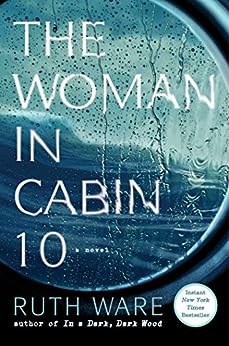 From New York Times bestselling author of the “twisty-mystery” (Vulture) novel In a Dark, Dark Wood, comes The Woman in Cabin 10, an equally suspenseful and haunting novel from Ruth Ware—this time, set at sea.

In this tightly wound, enthralling story reminiscent of Agatha Christie’s works, Lo Blacklock, a journalist who writes for a travel magazine, has just been given the assignment of a lifetime: a week on a luxury cruise with only a handful of cabins. The sky is clear, the waters calm, and the veneered, select guests jovial as the exclusive cruise ship, the Aurora, begins her voyage in the picturesque North Sea. At first, Lo’s stay is nothing but pleasant: the cabins are plush, the dinner parties are sparkling, and the guests are elegant. But as the week wears on, frigid winds whip the deck, gray skies fall, and Lo witnesses what she can only describe as a dark and terrifying nightmare: a woman being thrown overboard. The problem? All passengers remain accounted for—and so, the ship sails on as if nothing has happened, despite Lo’s desperate attempts to convey that something (or someone) has gone terribly, terribly wrong…

Lo Blacklock is a travel writer and while she has not had the best past few days, having been burgled, and gotten totally drunk right before leaving on a cruise around Norway on board The Aurora, an expensive yacht, built for smaller groups of 10 or less.

As the other passengers arrive, it felt rather like an Agatha Christie tale. On a ship that no one can leave.

The first night on board Lo is once again drunk and wakes suddenly by a noise next door. Is that blood on the glass? Was that a body?

Even after everyone looks into it and no one seems to be missing from the boat, she will not let it go. Of course no one believes her, part of that probably being that she was drunk and on medication.

The problem is the same issue I had with Girl on a Train. Lo is just not a likable person. None of these people are except maybe the boyfriend. Also the ending left a lot of questions for me that weren’t addressed in the book. It left me questioning how some of it could even be realistic. And obviously I am not alone.

When I was finished I thought, Well that was Girl on a Train on a Boat!

2 thoughts on “THE WOMAN IN CABIN 10 by Ruth Ware”