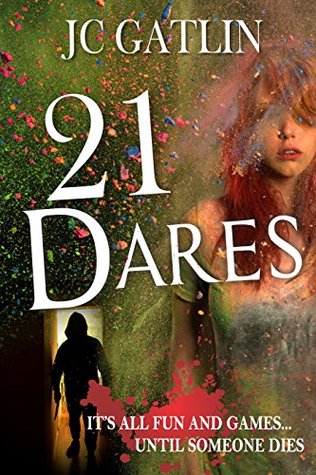 It’s all fun and games until someone dies…

Two months into college, Abbie Reed is about to turn 21. Not expecting a big deal as she really has no friends unless you call her cat, Clem, a friend, which she does. Her roommate is older and although they share an apartment, they haven’t made any attempts to get to know each other.

Daily calls from her father, going to classes and seeing a very odd shrink 2 days a week is pretty much all she’s doing.

Until the day she notices someone following her. Every day. Every where. When her shrink suggests she use her birthday as an opportunity to be more social, she isn’t interested in the least. The day before her birthday, she receives a call from a girl she knew back home. When McKenzie would come to visit her Grandmother, she and Abbie would spend time together, but Abbie does not consider her a friend. Abbie and her father lived with her Grandparents, having moved from Tampa after a traumatic event.

The title 21 Dares, relates to the game that McKenzie and Abbie’s roommate, Susan have set up. But why would someone she barely knows throw her this bizarre birthday party and game. She receives the dares by text and as the night goes on it becomes obvious that this is not a game for one of the participants. It is revenge. Sick and twisted, revenge. But for what? And finally she will come face to face with the mysterious man following her. But can she believe him?

I liked the premise of the story, if some of the characters were a bit lacking in personality and we didn’t know much about any of them except Abbie.

But it was a nice easy read and good for a YA book!