The Gail Force ( A Jake Travis Novel) by Robert Lane 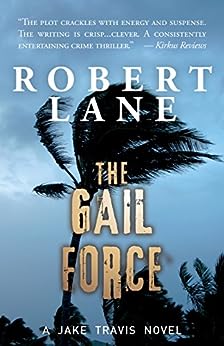 Jake Travis is back and once again up to his neck in bad guys!

When Riley Anderson shows up on Jake’s lawn looking for help and telling a fantastic story, we just know he’s going to help her find the man responsible for murdering her husband and return the favor.

Using an art gallery as a front for his wicked little blackmail schemes, Phillip Agatha has thugs as well as politicians and the FBI in his pockets. And the discovery of this sent Riley and her husband, Karl to the FBI, who in turn dropped them in a remote location where Agatha was waiting to get rid of them. Only Riley gets away.

Jake calls in some favors and gets himself involved. Although he can grudgingly admire Agatha’s knowledge and outlook on life, he knows he will need all of his wits to pull this off. Who can he trust at the FBI? Will he be able to rescue the lovely assistant, Christina?

Will he ever get off the Gail Force alive? And keep the people he cares about safe?

Mr. Lane’s writing is clean, crisp, no wasted words here, just edge of your seat suspense and nail biting twists! There wasn’t a pause in the action and I read this in one sitting. I had to know who was behind it all!

Looks as though we have another really good player on the field of Crime Thrillers!

Lane’s third novel,The Cardinal’s Sin is a finalist in the 18th annual Foreword Reviews INDIEFAB Book of the Year Awards.

Kirkus Reviews proclaims “The Cardinal’s Sin,” released August, 2015, “A cinematic tale…the prose is confident and clear, and the pacing smooth and compelling. Another entertaining mystery from Lane–possibly his best yet.”

“This brilliantly calibrated thriller,” adds Foreword Clarion Review, “bests the leading sellers in its class. Lane’s writing is sharp, evocative, and engaging. Lane, through Jake, wrestles questions of cosmological import with skill, outdoing Dan Brown and writers of his ilk as he juggles theology and mystery.” Five Stars.

Lane’s fourth Jake Travis novel, “The Gail Force” will be released September 21, 2016. In advance praise, Kirkus Reviews states, “The plot crackles with energy and suspense. The writing is crisp…clever. A consistently entertaining crime thriller.” Foreword Clarion gives it Five Stars, and says, “There’s little chance that anyone will turn the page before developing a craving for the next installment.”