A Time of Torment: A Charlie Parker Thriller #14 by John Connolloy 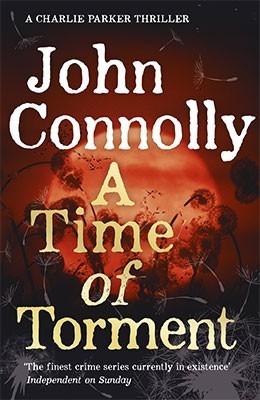 Jerome Burnel was once a hero. He intervened to prevent multiple killings and in doing so damned himself. His life was torn apart. He was imprisoned, brutalized.

But in his final days, with the hunters circling, he tells his story to private detective Charlie Parker. He speaks of the girl who was marked for death but was saved, of the ones who tormented him, and an entity that hides in a ruined stockade.

Parker is not like other men. He died, and was reborn. He is ready to wage war.

Now he will descend upon a strange, isolated community called the Cut, and face down a force of men who rule by terror, intimidation, and murder.

All in the name of the being they serve.

All in the name of the Dead King.

This is the 14th book in the Charlie Parker Thriller series. Charlie’s wife and daughter were killed by a serial killer. His dead daughter and his living one are both with him.  Charlie has died and been re-born and is now dealing with The Dead King.

When Charlie hears a strange story from a man, things begin heating up. Charlie and his two loyal but lethal buddies must go to The Cut. A place of evil, and a lot of inbred people who rule the place through fear and intimidation. What are these people hiding?

This a great Detective Thriller as well as quite a bit of the paranormal. There are multiple points of view, but if you have read the other books, you should catch on pretty fast. I liked the steady, but not boring, pace.

I think this one was even better than the last one! If you have never tried one of the Charlie Parker books, I suggest you do so!

I received a copy of this book from Netgalley and the publisher. It will be released on August 2, 2016.

John Connolly was born in Dublin, Ireland in 1968 and has, at various points in his life, worked as a journalist, a barman, a local government official, a waiter and a dogsbody at Harrods department store in London. He studied English in Trinity College, Dublin and journalism at Dublin City University, subsequently spending five years working as a freelance journalist for The Irish Times newspaper, to which he continues to contribute.

He is based in Dublin but divides his time between his native city and the United States.